I built this AMT '62 Bel Air 409 for the Mad Modeller '62 Bel Air Contest in which it won 4 out of 5 categories.  Best engine, best overall, best interior and best chassis.  It took well over four months and I barely made the deadline.  This is my first completely opened up build.  I've opened trunks before but never doors.  I wanted this car to retain the elements that made it such a desirable car in '62 as well as make it a modern boulevard bruiser. 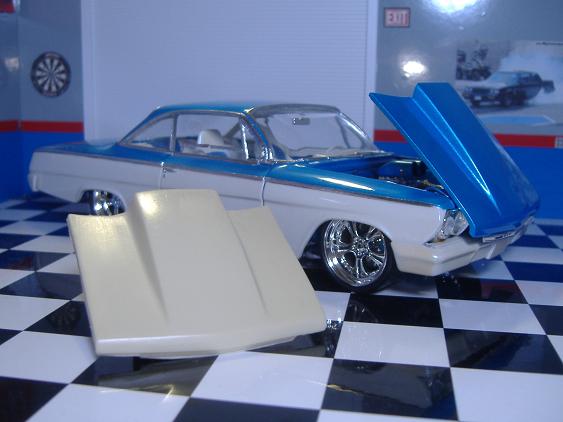 The Model Builders October 2009 Model of the Month

The members of the Mad Modeller Forum decided to use the AMT '62 Bel Air as the build for the first TMM Model Contest.  Blown 409 was my entry.  I usually start with the chassis on my builds and this one was no exception.  I heavily modified the rear axle and suspension to accomodate the wider tires and provide a lower ride height.  The chassis had to be tubbed in the rear.  I used chrome disc brakes and 23" Phat Daddys from Pegasus.  The fuel and brake lines are from Lex's Scale Modeling.  The front suspension was modified too using kit parts and elements of a NASCAR suspension.  The front inner wheel wells were cut out and I made new larger ones from Evergreen sheet plastic to house the larger tires.

The kit supplied 409 was used.  I wired and plumbed it using ignition wire and fuel line from Lex's Scale Modeling.  The distributor was made from aluminum tubing.  No detail was missed. There's even a dipstick.  The kit supplied valve covers were smoothed and painted blue to match the upper areas of the car.  The block was painted white to match the lower portion.  The super charger  and drive belts came from the AMT '68 El Camino Street Machine and it was topped with the shotgun blower from the AMT Yankee Challenge Dodge Challenger.  I removed the chrome from the blower and painted it blue to match the body and added all neccessary linkage.  I used the kit exhaust manifolds and the kit exhaust that I cut off and rerouted in front of the rear tires.  I capped them of with stainless steel tips. The electric fan came from the parts box while the braided radiator and heater hoses came from the Model Car Garage.

The interior is one of the highlights of this build.  I began by modifying the front and rear custom seats of the AMT '57 Ford Fairlane to fit in the wider body of the Bel Air.  After painting them and adding blue flocking to emulate fabric inserts, I used custom matched seatbelt material from Lex's Scale Modeling.

The seatbelt hardware came from MCG.  I used the stock dash but added an after market audio/video system complete with video screens on the back of the front seats.  The steering wheel and 6x9 rear speakers are from the AMT '67 Impala 427 SS Street Machine.  The turn signal was made from a pin head.  I used the shifter from the aforementioned '57 Ford Fairlane.  The custom console was crafted using the optional console from the AMT '58 Impala and sheet styrene.  To finish off the interior I painted it to match the exterior and then BMF was applied for the chrome trim.  Testors flocking was used for the carpet and on the seats.  Inside the trunk is an aluminum nos tank and blue flocking for carpet.

For the body, the first thing I did was open the doors and the trunk.  I made the door jams using sheet styrene cut to the shape of the body and doors.  The door hinges were made using metal rod and plastic tubing.  All badges and emblems were shaved.  The trim was removed from the rear of the trunk and around the taillights.  Smooth amber and red lenses were used instead of the factory lamps.

I made the custom cowl hood using Evergreen sheet pieces attached to the kit hood.  Resin versions of this hood as well as various other hoods are now available at LSM for $8.50 w/free shipping.  I painted the body Dupli-Color Linen White.  I then used Paint Wih Pearl Blue Shimmer pearl pigment over the white.  After taping the lower part of the body off I used Paint With Pearl Electric Blue Candy Pigment for the top of the body.   After BMF was applied, I covered the body in 7 layers of Dupli-Color Clear.  The Chrome was removed from the bumpers and I then painted them body color.  The BLOWN 409 plates were made using Acme License Maker.

For more information on how this build came together, click here for the Works in Progress page.